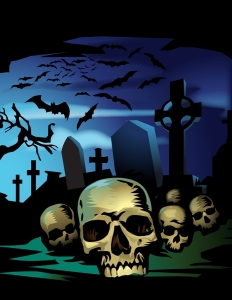 10 booby traps that can kill your copy, career, and cash reserves

These stories are bizarre…

They tell of people getting hurt, harassed, or murdered by objects that have dreadful curses placed on them.

But we’re going look at a few anyway before covering how they connect to health copy.

–Our first tale supposedly happened in the early ‘70s. A raggedy doll named Annabelle stunned two college roommates by changing positions and moving to different locations in their home.

Things got worse after a friend, Lou, warned them that they should get rid of it.

The story goes Annabelle then visited Lou in his apartment and strangled him till he passed out. The next night, sounds from a nearby room caused Lou to investigate.

His loud screams soon had the female roommates by his side. They found two large claw marks on Lou’s chest and an empty room—except for Annabelle.

Ed and Lorraine Warren, known for their Amityville horror work, investigated. The demon-possessed doll, they concluded, was actually a conduit to hell.

Busby strangled his father-in-law to death in 1702. Before his execution soon after, he put a curse on his favorite chair.

Since then, allegedly 63 people died early deaths after sitting in the chair.

The Thirsk Museum in North Yorkshire, U.K., which houses the infamous chair, had to suspend it from the ceiling in 1972. Why? Too many people tried to commit suicide by sitting in the chair!

–Our last example is the jinxed Basano Vase.

In 1988, an enterprising soul discovered the 15th century silver Italian vase in a yard. After reading the enclosed curse—“Beware…this vase brings death.”—and trashing it, the person sold the vase to an auction house.

A series of sudden death followed. A pharmacist died three months after buying the vase…a 37-year-old surgeon bought it and died two months later…an archaeologist then purchased it—same thing, same time frame…and the next owner died within a month of buying the vase.

Italian newspapers claim police confiscated then reburied the vase in a lead box in a secret location. 1

So what do these disturbing tales of cursed objects have to do with health copy?

You wouldn’t want any of these sinister objects in your house, would you?

The same fear applies to your copy. You don’t want anything in your promo that’s going to doom it—or you and your client.

Beware of this witch’s brew of possible pitfalls

Let’s start with one of the most severe:

Simply, this is an advertising claim that lacks adequate support. The Federal Trade Commission (FTC) requires proof for all express and implied product claims.

And several factors decide the right amount and type of substantiation needed.

To make your health-related claim(s), the FTC says you need to provide:

“Tests, analyses, research, studies, or other evidence based on the expertise of professionals in the relevant area…that were conducted and evaluated in an objective manner by qualified  persons…using generally accepted procedures to yield accurate and reliable results.” 2

Now onward to our next taboo…

Careful here. This subject matter can be devilishly tricky if you’re not familiar with it.

Health claims cover a connection between a nutrient and a disease or health-related condition. These must have “significant scientific agreement” and pre-approval by the FDA.

Also, the FDA’s modernization act of 1997 allows health claims based on “authoritative statements” from certain federal scientific bodies, such as the National Institutes of Health.

Here’s an example of a health claim:

“This formula contains 1,000 milligrams of cinnamon, which is known to help fight diabetes.”

No FDA approval? Then use proper structure-function statements. Simply, such wording refers to a nutrient’s effect on the structure or function of the body for maintaining good health.

However, please keep in mind:

Here’s an example of a structure-function statement:

“The nutrients in this proven formula help promote strong, healthy joints within weeks of taking.”

Next, there’s another kind of claim that can bedevil the unsuspecting marketer…

3.  A False and Deceptive Claim

This one violates a major FTC rule (and many state consumer protection laws): Advertising must be truthful and not misleading.

Suppose a company says its fiber product is proven to aid in weight loss. However, the amount of fiber used in the supplement is less than the amount in two published, peer-reviewed studies.

Also, say a company markets a capsule that contains a concentrated extract of an herb used in its raw form in China to brew teas for boosting energy.

If the concentrated extract isn’t consistent with the traditional use of the herb and causes a significantly different effect, the ad may still be deceptive. 2

Next, beware, lest you…

Ever want to write, “My product is 10 times more powerful than (competitor’s name) product”?

Under this federal trademark statute, you can’t state this without proof. This act says making that claim without evidence is a misrepresentation of yours or another person’s goods or services. 3

Defy this act and you’ll soon be shackled—by a civil suit.

Our next potential landmine is the…

5.  Mishandling of the Fair Use Doctrine

How much copyrighted material can you use in your copy or content without its owner’s permission?

This question continues to mystify many marketers and writers. But here are six general guidelines to follow:

Also, keep in mind, you could still be sued even if you follow these guidelines. Then, your careful following of fair use rules would be your defense. 4

So be on the safe side here. Do your due diligence before using any amount of another author’s copyrighted work.

Now let’s look at an easier to understand copy killer:

For instance, boasting that, “My martial arts studio provides the deadliest self-defense system ever,” is puffery.

Little worry of false advertising here. A competitor or the FTC would have trouble disproving your claim.

Problem is vagueness doesn’t sell. But we all know what does: Specifics.

And when you use them along with the needed proof, you greatly boost your chances of reaching your promo’s goals. 3

The next way to jinx your copy is to violate…

7.  Trading on a Name Statutes

Are you aching to proclaim in your copy that your self-help guru’s new book, “Takes up where Eckhart Tolle’s ‘The Power of Now’ left off”?

Don’t do it. Under this rule, you can’t exploit a living famous person’s identity without his or her permission. Also, implying that that they back your claims or product can quickly get you sued.

However, it’s unlikely you’ll have an issue if you do this: Bury the public personality’s name in your copy—say on page 10 of a 12-page sales letter—and put it in a regular font. 3

So let’s emphasize three points in case you decide you must use such a person’s name:

…try to steal business away from that personality. 3

Another method of hexing your copy is if you…

Let’s start with some examples.

“I guarantee you’ll be able defend yourself against any mugger after two weeks of my karate class. If you can’t, I’ll give you $1,000.”

“I guarantee if you don’t lose 20 pounds in one week after you start taking my amazing new diet powder, I’ll Fed Ex you five 100 dollar bills!”

…legally binds you to those promises. Remember, advertising is considered a legal offer.

You can still make a guarantee like one of these, but if a customer takes you up on it—hello, bankruptcy court.

Also, using an over-the-top guarantee like one of these can get you in trouble with the FTC. 3

Our next “cursed object” can doom you to a different kind of court. It’s the…

Here, we’re only going to look at a few of the most vital points.

First, when it comes to defamation, claiming that using the wrong name or information was an accident or wasn’t deliberate is no defense. Only one thing matters: whom the reader believes you’re naming. 3

So if you’re getting info from, say an FTC press release, triple check the spelling of all of the names, companies, and websites.

According to common law theory, if you quote another person’s libelous statement, you’re just as guilty as that original speaker. So, just saying you were repeating something won’t keep you out of court. 5

And now for our final copy nightmare…

A surprising number of people in our market are either unaware of this one—or just ignore it.

All of us know testimonials must be truthful. But do you know you must have the proper scientific evidence to support your testimonial’s claims?

The FTC says any customer comment you use about the safety and efficiency of your product must be backed by proof. This shows that the experience is similar to what all prospects can expect.

If you don’t have it, a clear and conspicuous disclaimer is needed. A disclaimer in the same font size right next to the ad stating, “These results are not typical. (Provide expected results in short sentence),” would suffice.

And if you have expert endorsers? Ensure they meet these criteria:

Also, both expert and consumer endorsers must reveal any personal, financial, or similar ties to the advertiser. 2, 6

Now, the good news. You only need one weapon to make sure you don’t make any of these 10 grave errors. And that’s…

Knowledge: Use it to “exorcise” YOUR health copy

Now you know the insidious dangers to watch out for when you write or edit health copy. Of course, you’ll want to double check legal sources if you’re uncertain about any of them.

And don’t wait for the exorcism editing process to catch these copy gremlins. Yes, many writing coaches discourage editing while writing. But, in this case, you’re going to want to spike any of these the second you see one’s creeped into your copy.

So do you want successful health copy for your business? But are you frightened that you may end up facing one of these 10 terrors?

Here’s what to do: Send me a message with the form beneath the references right now. I’ll quickly respond and let you know how I can end your nightmare starting today.

1 thought on “Do These “Cursed Objects” Haunt Your Health Copy?”

"Dale's work is of the highest quality, and it delivers results. He is prompt completing an assignment and always a pleasure to work with."
Kevin Potter, Owner, Sunrise Villa Vacations, Cabrera, Dominican Republic

“Dale has always been a pleasure to work with, and his writing style is consistently precise, pertinent and intelligible. Whatever the project, I recommend him to you without equivocation."
Kevin Hayes, St. Johns, MI--Attorney and author of "Kickland," "Don't Vote for Me," and "Amrit's Sin of 2pi."